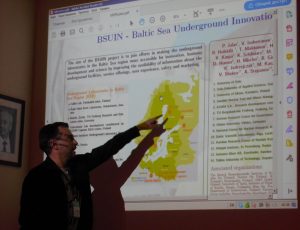 The conference took place in Russia, in North Caucasus, Karachai-Cherkessian Republic in October, 7.-14.10.2018.  The theme of the conference was “multi-messenger astronomy”. The idea of it is studying space objects involving the integration of various observation techniques, often very distant from traditional astronomy. Many of these techniques, such as neutrino detectors or the next generation of gravitational wave detectors, require location of the experiment in underground laboratories.

Moreover, the conference was hosted by Baksan Neutrino Observatory of Institute for Nuclear Research of RAS (BNO INR RAS) one of the largest and most important underground laboratories in Russia. The Baksan laboratory is recognized in the world as one of the observers (along with Gran Sasso in Italy and Super-Kamiokande in Japan) of  neutrino burst from supernova SN1987a. It was the only such observation so far. The host naturally focused the subject of the conference on underground physics and attracted underground society.