Why underground? Characteristics of underground laboratories (UL) that are promising, or unique 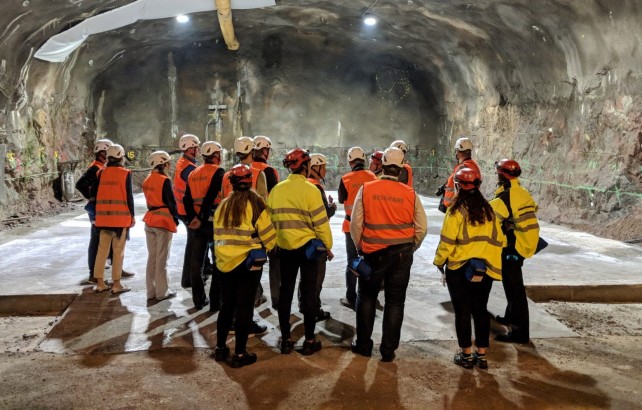 ➡ At the ground, we have plenty of electromagnetic waves, and in UL these might be well controlled.

#1 Electromagnetic waves in form of radio waves, all kinds of light, and X-rays or still more energetic gamma-rays would not penetrate to sufficiently deep underground places. We can have no such radiation or introduce only kind(s) we would like to have (e.g. light). At the ground level in most places we have a lot of radio waves which is not very easy to shield. It is easy to protect a place against the light. Very few high energy photons can be measured at the ground level; they are generated by cosmic rays in the atmosphere.

➡ Difference in radioactivity might be even more interesting for innovation applications.

#2 Radioactivity was discovered at the end of XIX century as radiation coming from some elements present in Earth’s ground (in 1896 by Henri Becquerel). Now, we know that at the ground level there are 3 major sources of radioactivity present nearly everywhere: radiation from ground (mostly radon-222), secondary cosmic rays and potassium-40 (nearly everywhere, including our bodies). The natural radiation level is small (by definition, as we can live). Potassium-40 makes a few thousands decays per second in our body, each decay produced relatively energetic electron, and even more energetic gamma-ray in the next decay. Cosmic ray muons (short living particles similar to electrons but about 200 times heavier) are penetrating and ionizing particles, and about 5 of them crossing everyone’s head every second, producing about 20 millions ionization in it per second. Radon is coming nearly everywhere from the ground (seas and lakes surfaces are protected areas). For human bodies radon is the most important source of radiation.

#3 When moving to underground laboratories, the main component of secondary cosmic ray radiation – muon flux is reduced by factor 10 for 15 meters underground or by a factor about 4 millions at 1.5 km underground. Level of other natural radiation depends on the characteristics and configuration of surrounding rocks. Salt mines with low content of potassium in salt have a very low level of natural radiation from rocks, and heavy metal ore mines have relatively high radiation levels from rocks.

➡ Radioactivity might have different forms and different energies which are important as they are the main parameters of radiation interactions.

#4 Radioactivity may have different nature. Alpha particles (helium nuclei) have a very small range and can be stopped using any kind of shielding. However rocks with alpha radioactivities would in most cases produce neutrons. Neutrons can penetrate through quite thick shielding. Beta radiation and/or gamma radiation (electrons or positrons) could be stopped using by a few centimeters thick lead shielding.

#5 Radiation might have different energies mostly due to their origin. These energies are very important for radiation influence on other materials or bodies. The basic energy unit is called electron-volt (eV) and energy of 1 eV is a very small in macroscopic world. In microscopic world molecular bound energy is usually within a range 1 – 10 eV, and visible light energies are within limits 1.6 eV (red) and 2.4 eV (blue). More energetic ultraviolet (UV) light might already destroy some molecules.

#6 Radiation interaction with matter depends on energy and type of radiation product particle. Starting the list from low energy “particles” (photons) we might have reflection from material surface, heating properties (penetration and energy deposit), molecular destruction, transfer energy to the atomic electron and its displacement with significant energy (allowing the electron to do additional ionization or for more energetic processes), electron-positron pair production, when these products might do additional ionization or annihilation (for antimatter particle – positron), atomic nucleus excitation (usually followed by artificial radiation by excited nuclei and in some cases change of nucleus isotope or nucleus charge – change of atomic/chemical properties), atomic nucleus destruction. Higher energy radiation might participate in most (not all) of “lower energy interaction”, too. Other “massive” particles can ionize penetrating materials. All such particles are interacting with matter and can participate in the destruction of molecules, atoms or nuclei.

➡ High energy radioactivities (due to cosmic rays) are much lower in ULs as compared with ground level.

➡  Most of the low energy radioactivity could be shielded, but neutrons are difficult to stop (# 8), and they might play important role in UL activities requiring low background. Low radiation background laboratories (naturally in ULs) could be unique places for innovative chemistry, studies of defense mechanisms of micro-organisms or localization of huge memory storage and computer farms (#9). Physicists value UL’s conditions for many years, and made many discoveries there, already, and even more are expected (#10).

#8 Neutrons and protons are very alike and make atomic nuclei (hydrogen has the only proton). However, neutron does not have an electric charge. Neutrons are a little heavier than protons, and free neutrons can decay to protons (and electron + neutrino) with an average lifetime of nearly 15 minutes. Electron can get significant energy limited by 780 keV (on a top of its mass-energy of 511 keV). On average that electron has enough energy to make thousands of ionization leaving all kinetic energy at the place. Free neutrons can emerge from nuclear radiation processes and have kinetic energies of about 1 Me, or from high energy particle (e.g. created by cosmic rays) interactions with higher energies. Since neutrons have no charge, they do not lose they kinetic energy via ionization. Instead, they lose energy via elastic scattering with nuclei of matter. This process is very efficient and in solid materials last a small fraction of millisecond. At the end of that process, neutrons have so-called thermal energy (i.e. not zero). Atoms in the matter are not motionless. They “vibrate” and the vibration energy is related to the temperature of that piece of matter. For 300 ºK (27 ºC) neutrons have final, thermalised energy about 0.025 meV (1 milli-eV = eV /1000). Although this value looks very small neutron with that kinetic energy is moving with a speed of about 2000 m/s. In solid matter, it does not go too far, as its effective displacement is a diffusion due to frequent scattering with other nuclei.

#9 When it could be worth going underground to make innovations? We used to live in a “standard” radiation environment. It even might be necessary for living organisms to stay in these “standard” conditions.

➡ However, some chemical processes which would require very weak bindings between molecules could be more efficiently studied, developed, or produced in a low radiation environment naturally present in some of the underground laboratories. A biologist might study the role of radiation in the development and maintenance of defense mechanisms in living organisms, which is very timely these days also in conditions where the radiation level is lower than natural.

➡  Another example relates to electronic parts. It is known from experience with space electronics, particle accelerator electronics, or electronics placed near to nuclear reactors that some electronic parts might be damaged temporally or even permanently by the radiation. Moving to lower than “standard” radiation environment electronics might work longer without problems. It might be interesting for huge computer farms or huge computer data storage to place them in underground localization, e.g. it is known that neutrons are particularly harmful to digital memories.

Lessons learnt: Learning from others